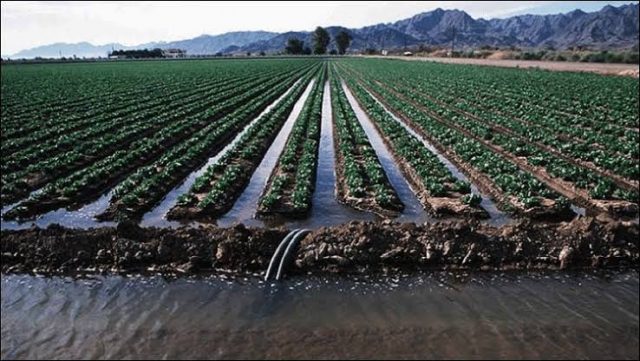 Irrigation :Irrigation is the artificial application of water to partially meet the crop evopo-transpiration requirement.

• Most common method of irrigation in India.  It includes following methods.

• Water is applied to the crop by flooding it on the soil surface. • This method is practiced where irrigation water is abundant. • Mostly adopted in wetland rice. • Useful in uniform surface soils with good water holding capacity.

• Most common among surface methods, suitable for close growing crops e.g. wheat, groundnut, pearl millet etc. • It consists in running water in to relatively level basins surrounded by small ridges. • Field with slope up to three per cent can be irrigated by using this method. • A limitation of this method is that it has too many ridges which occupy large area of land.

• Suitable for fruit crops d. Border strip method: • In this method the field is divided into number of strips, which are separated by ridges. • Soils with a slope of 0.5-1% is suitable for this method. • Field with slope up to seven percent can be irrigated when pasture crops are grown. • Suitable for all close growing crops on medium to heavy texture soils • But not suitable for sandy soil

• This method is generally used to irrigate row crops and vegetables and is suited to soils in which infiltration rates are between 0.5-2.5 cm/hour. • It is ideal for slopes varying from 0.2-0.5 % and a stream size of 1-21/second. • The length of furrows may vary from 30 m for sandy soils at lesser slope to 300m for heavy soils at greater slope. • Furrow irrigation is suitable to most type of soils except sands that have a very high infiltration rate. • Furrows are mostly suitable for root and tuber crops

• The term” Surge irrigation” is the intermittent application of water to the field surface under gravity flow which results in a series of ON & OFF modes of constant or variable time span.

Most IMP Sections  which Need to Prepare  For JRF- Entomology 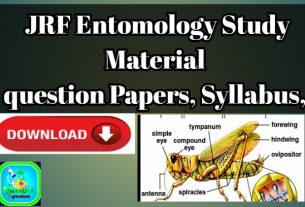 2 thoughts on “Irrigation and Their Types”